Excluding the Trumps, 2016 was the year of chatbots. And it looks as 2017 is just moving in the same direction. Just browsing Botlist, it feels like there are chatbots for everything nowadays. Even the big business guys are chatting away (no pun intended) with:

Chatbots have massive potential to change user interfaces as we know them. Let’s look at “the big picture” as Space10 writes in Conversational Interfaces: The Next Big Technological Revolution?:

What Steve Jobs saw in the graphical user interface (GUI) when he was introduced to it back in 1979 was a way to expand the market for computers. However, as elegant and efficient as it is, the GUI still requires humans to learn a computer’s language. Now, computers are finally learning how to speak ours.

Natural Language Processing (NLP) projects like chatbots are far from casual tinkering. Business giants everywhere are throwing everything they have at this problem. Google has Google Assistant, Apple has Siri, Amazon has Alexa, IBM has Watson, Facebook has DeepText, Microsoft has Cortana, … you get the picture.

These NLP/AI efforts all seek to create the standard within conversational interfaces, which experts consider the next GUI revolution. You can compare to how Apple set the standard within smartphone interfaces with the iPhone. What Apple did really well with the iPhone was launching App Store. It allowed third-party developers to build apps on the iPhone. This is exactly why the tech giants start to bet the horse on easy-to-use chatbot frameworks.

Recent efforts within chatbot frameworks, where third-party developers can easily build their own chatbots for specific needs, needs to be powered by cutting-edge NLP algorithms. This is why it’s the ultimate battleground for the tech giants, who are the only ones collecting enough data to build NLP algorithms that are powerful enough to work as a backbone of chatbot frameworks. A few examples of these bot frameworks include:

As you can imagine, whoever owns the most adopted chatbot framework will collect even more data. If chatbots are growing in popularity and developers are creating conversational interfaces in bulk, one can only imagine the insane levels of data being processed behind the scene. Nutty! It’s a positive spiral that the tech giants are fighting to stay ahead of.

This is also why the tech giants justify large chatbot acquisitions with the classic argument that whoever collects the most data, will ultimately win the overarching AI game.

No, because when you call someone in an airline, bank, health insurer or a hospital, you’re often speaking with an “automated attendant” first. That attendant, or bot, delivers the information you seek by prompting you for certain commands. The experience is usually frustrating since most of these answering machines have no built-in machine-learning element. They are simple dialog trees without a feedback loop.

Luckily, that is all about to change with “AI assistants” becoming creepily realistic. The IT departments at airlines, banks, health insurers or hospitals are no match for those at Google, Facebook, Amazon, IBM, Apple, and Microsoft. The sheer amount of data these giants horde has the capacity to build an omnipresent assistant.

That’s all fine, it’s the whole big data story all over again, what’s new here? The new thing that happened in 2016 is suddenly, third-party developers can easy build bots, using frameworks that are built on top-notch algorithms and massive datasets. This enables any company to create powerful assistants that run on the same algorithms as the big tech companies. Time-wasting conversations with a stupid answering machine are long gone!

The assistants mentioned earlier from the big tech companies seek to create a general purpose AI that can match human capabilities in almost every aspect of life. To do this you need enormous amounts of data.

We strongly encourage anyone interested in the superintelligence discussion to check out Tim Urban’s The AI Revolution: The Road to Superintelligence. And while you are at it, follow up with Elon Musk’s famous comparison of general AI “summoning the demon”.

That is not what chatbots are about. They are much more focusing on solving very specific issues, giving simple answers to simple problems. In other words, narrow purpose AI.

Wiredelta® is not building a general purpose AI. We are laser-focusing on creating a narrow AI to support users building websites and apps in open source frameworks like WordPress, Drupal, Prestashop, Magento and more. No need to summon any demons in order to build a website or app!

Our narrow AI assistant is designed to help users setup, edit and customize their website or app in WordPress, Drupal, Prestashop, Magento and more. It crunches more than 4 years of data and knowledge collected by Wiredelta® developers, compressed into one kick-ass assistant! The end goal is for our AI to be able to guide any user in any open source framework imaginable to customize websites and apps. This happens as it will grow in complexity over time with more and more projects under its belt. It’s like the self-driving car, only here its users and developers training an AI to take on exponentially more complex tasks within web and mobile development.

While building our chatbot, we created a version of Wiredelta’s AI assistant in Facebook’s wit.ai, IBM’s Watson and Google’s api.ai. We are still testing all three to see which framework performs best, but our strongest efforts are going into api.ai. Why? One simple reason: It’s a data game, and Google collects the most, so their NLP algorithms are most likely to make the best possible version of our AI assistant. Not to mention, Google Translate has developed an AI that made its own language, enabling Google to translate any language to another! This would make it possible for our AI to assist any user, in any open source framework, in any language.

Where will I see Wiredelta’s AI?

Users first see our chatbot while trying our demo, at which point  it asks users whether they need some assistance to edit their website or app. You can see the conversation in the right side where a user is editing from the admin area: 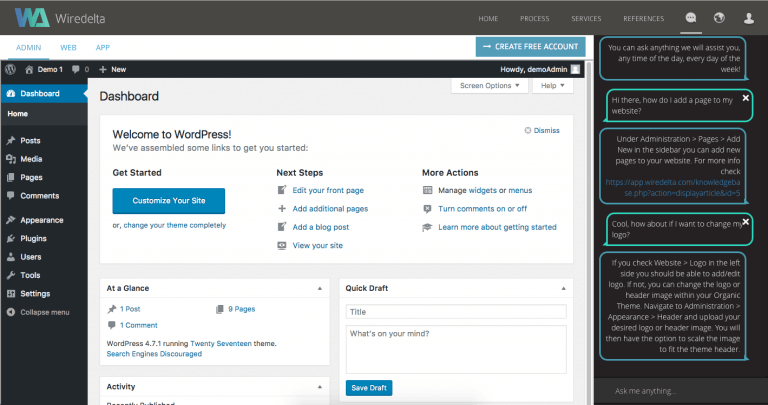 The AI assistant continues to ask questions both when in the admin area, but most notably in the customization are under “Web” or “App”. This is truly the power of an AI assistant that can push best practices and specific suggestions to the user: 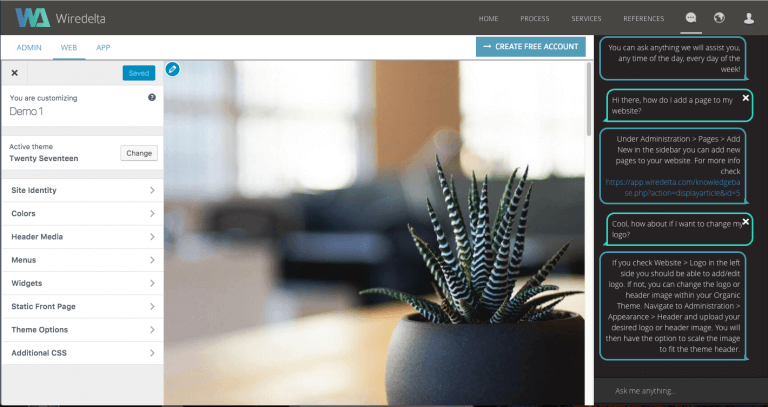 A picture is worth a thousand words they say!

Initially, our AI assistant will have ultra narrow, pre-programmed, intents which allow it to respond in an “automated attendant”-way with some sweet human touch to it. However, the more websites and apps we build, the AI assistant will get powerful enough to help any non-technical person build awesome websites and apps. No more painful waiting time and conversations with your “web-guy”, who never has time to answer, our AI works 24/7 and only gets better the more you work together!