Ecommerce platforms like eBay and Amazon are crucial in our daily lives, especially during times of global pandemics like the COVID-19. Through these platforms, we get the essential supplies, like ramen noodles and toilet paper we so desperately need! Jokes aside, it’s hard to even think of a world without such online retailers. So, one just has to ask. How are they developed?

As we already explored Amazon’s story, we will focus on eBay today. When did it start? How did it start and how was eBay developed?

The beginnings of eBay

It all started in September 1995, when Pierre Omidyar built eBay from scratch, by himself in one weekend. Back then, eBay was actually called AuctionWeb and it was the first website ever that connected sellers and buyers in this way online. Little did Pierre know that his hobby will soon become one of the world’s most fruitful businesses in the world. 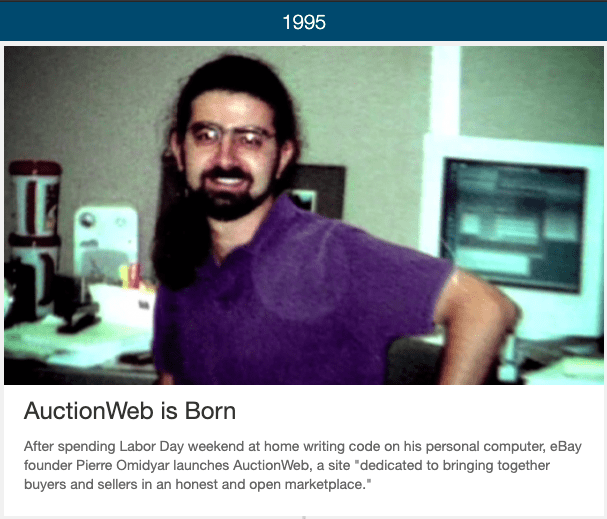 In fact, just a year later, the business was already booming, reaching $7.2 million in sales. Suddenly, it wasn’t just a hobby. AuctionWeb became an established business. They hired their first employee Chris Agarpao (still at eBay today) and Pierre quit his day job to focus on the new venture. They also brought Jeff Skoll in as President to help grow AuctionWeb and in September 1997, AuctionWeb officially becomes eBay.

Next September, in 1998, eBay went public, with an Initial Public Offering (IPO) of $18 a share. However, after listing their shares on NASDAQ, the value of the shares exploded to an incredible $53.50 a share in just one day!

On the path to greatness

Soon after, the company became global, and in 2000, eBay launched its first API for developers to integrate eBay on their websites. This was a highly progressive step towards becoming the open-platform we know eBay is today.

In July 2002, eBay acquired PayPal, a secure payment service, thus starting a successful 13 years long adventure. The partnership lasted until 2015 when PayPal again was spun out to become an independent entity. However, PayPal is only one of the many acquisitions eBay made throughout the years, expanding its portfolio every year. And with it their range of services. 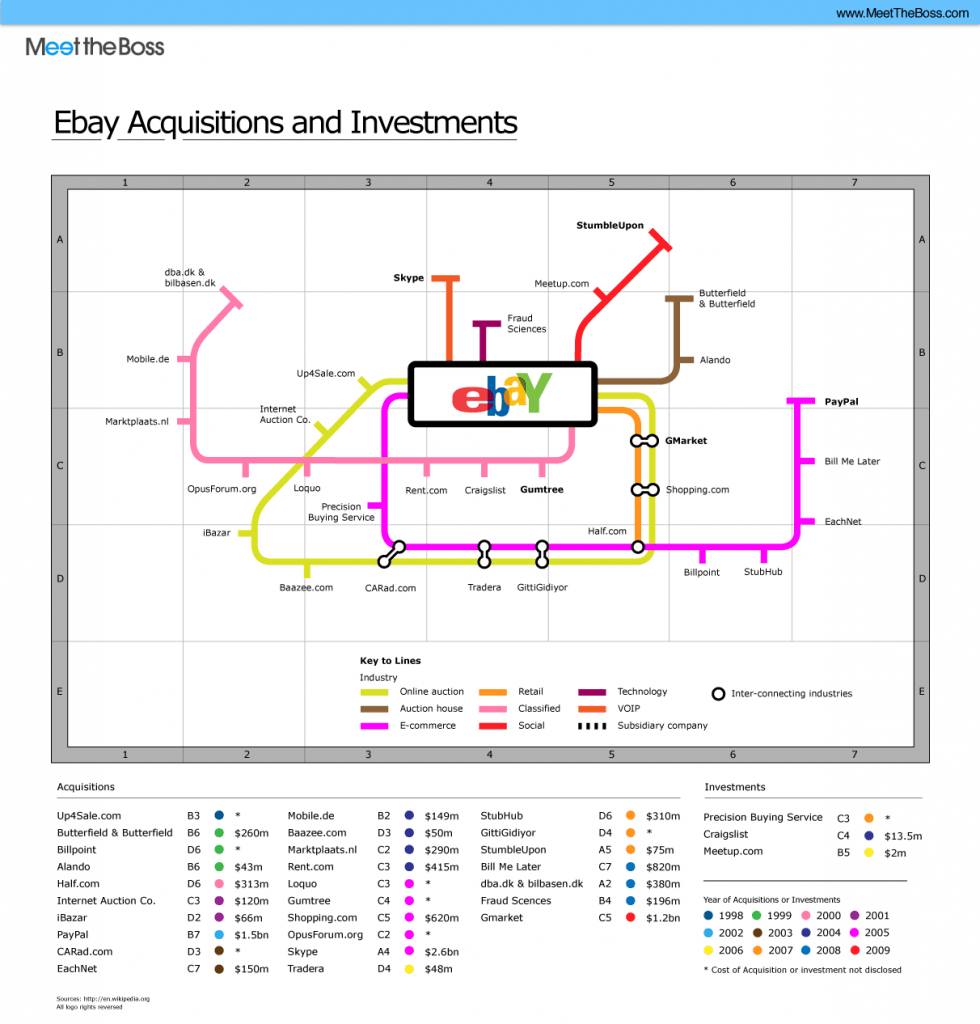 In 2008 eBay became one of the first companies available on mobile by launching its first iPhone app, and then the iPad app in 2010. Soon after, in 2011, eBay acquired Magento, one of the world’s most popular open-source e-commerce platform builders. With Magento now under their tool belt, eBay had the possibility to reach even greater performance goals.

It is clear that eBay found a strategy that worked well for them and continues to work to this day. A clear statement for that is their 174 million active users.

No doubt, eBay’s story from the business side makes for an inspirational read. However, there is a side of eBay that only a few know. In 2001 eBay started the Giving Works program, which initially helped victims of the 9/11 tragedy. Over the years the program helped over 30.000 charity programs, raising over $500 million. 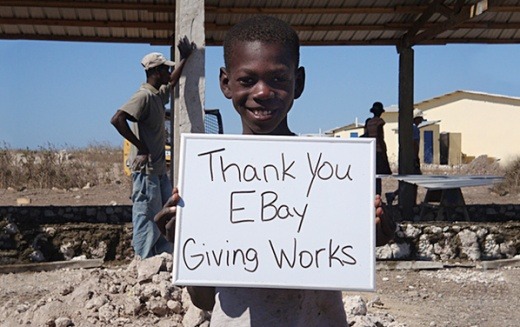 In 2006 the company joined the United Nations Global Compact, a UN initiative for corporations leading the fight against both environmental and social-economic crises around the globe.

Over the years, eBay launched several initiatives and programs dedicated to charity or reaching its environmental and equalitarian goals. The Green Team, the Diversity and Integration, and the Women’s Initiative Network (WIN) are just a few examples. The Green Team is a group of approx. 300.000 employees volunteering their time towards the helping environment. On the equalitarian side, the D&I program earned eBay the top ranking for the Corporate Equality Index focused on LGBTQ rights this year. Good job eBay!

eBay is an auctioning site for any item possible, used or new. Literally anything you think of, there is a 95% chance you’ll find it on eBay. From a seller’s perspective, setting up and starting your own eBay shop is easy. All you have to do is:

But if you still feel a bit lost, no worries. eBay also has a Seller Help Center for those who need a bit of guidance before diving into business. If you still don’t have all the answers, try reaching out to the outstanding official community of both buyers and sellers behind eBay. Surely someone will have the answers you are looking for.

The seller fees system eBay is also simple and straightforward. Basically, sellers pay two types of fees, a listing fee, and a final value fee. In simple terms, just like Amazon and other online retailers, sellers on eBay pay a monthly fee for their shop and an individual fee for each item they sell based on its size and volume.

How was eBay built?

From a technical perspective, eBay has also gone through countless changes over the years, constantly adapting, improving, and growing its infrastructure. So, to try and understand how eBay is built, let’s start with the servers. In 1999 eBay was one massive database server. This, due to the amount of traffic, caused the site to slow down and eventually break. According to eBay, this was a pivotal point on their path as a business.

As a response, in 2005 eBay implemented a grid computing architecture that used 200 database servers and 20 search servers. This was four times the size needed at any given time. In 2018, however, eBay switched to a Point of Presence (PoP) strategy by deploying its servers to data centers around the world. Not only did this strategy ensure better performance, but it is also much more secure as it is a decentralized system.

The technical foundation of eBay was built using Perl, a general-purpose cross-platform language. At the time eBay started, Perl was a very popular web development tool as it had a fast development cycle and outstanding text manipulation capabilities. Perl also communicates well with other languages, making it flexible and easy to work with.

In 2007, eBay finally became an “open-platform” and launched the progressive initiative called eBox. This initiative allows both internal and external developers to build new features and deploy them faster and independently from one another. Like the platform itself, eBox was also based on Perl. However, over time, eBox became obsolete and it was left behind.

Today, eBay is a complex system that uses a large variety of programming languages and frameworks. Some examples would be PHP, .NET, and Java, according to the eBay API and SDK documentation. And of course, let’s not forget our favorite framework, NodeJS. So, while back in 2000 when the first API was released, developers needed to learn Perl, now they get a free choice in what technology they use. What’s even better, the documentation is compiled as a step-by-step guide for anyone who is interested. After all, eBay is not just a business, it’s a community and everyone is invited.

What a story! We started out back in 1995 when Pierre spent a weekend building a simple website as a hobby, to connect people. Now we are looking at one of the world’s largest e-commerce platforms, worth billions. More importantly, eBay is connecting people not just through business, but environmental movements, social-economic initiatives, and charity. If this is not an inspirational story, we don’t know what is.

And if you have an idea as Pierre had back in 1995, don’t let it go. Reach out to us and we can help you build the next eBay.