Not long ago, we begged the question whether Uber was really worth $100bn that they sought out to achieve. We argued that a company like Uber that has never flipped a serious profit could never be a $100bn company, and as of writing this, Uber Technologies Inc (UBER) is trading at a market cap of $68bn. But let us bring you back in the years when the Uber App was created.

What was behind the Uber idea?

A snowy evening in Paris, France. The year was 2008. Two young men Travis Kalanick and Garrett Camp were in need for a taxi, but they couldn’t find one. They came up with a brilliant idea. What if people could request a car ride from their phone? One year later, Travis and Garret created UberCab, a smartphone app that lets people get a ride just with the help of a button. In 2010, the first car ride was made possible in the city of San Francisco. On the next year, just 3 years after the young men came up with the idea, everybody in Paris were able to find a taxi with the click of a button. Astonishing,  isn’t it?

Uber recently announced their first post-IPO quarterly results, losing $1 billion in the past three months. Not all their spending goes to building and maintaining features for their mobile apps, but a large portion of their total spending does. Some would ask – how is that even possible, it’s just an app!? Let’s dive into how.

Uber services are reachable through an Uber mobile app. It was first launched on iPhone and afterwards extended to Android and Blackberry. The 6 key technologies that Uber’s co-founders, Garrett Camp and Travis Kalanick, relied on were all based on geolocation. However, the company’s succeeded because of its core value and that is being able to track all available Uber cars around you. 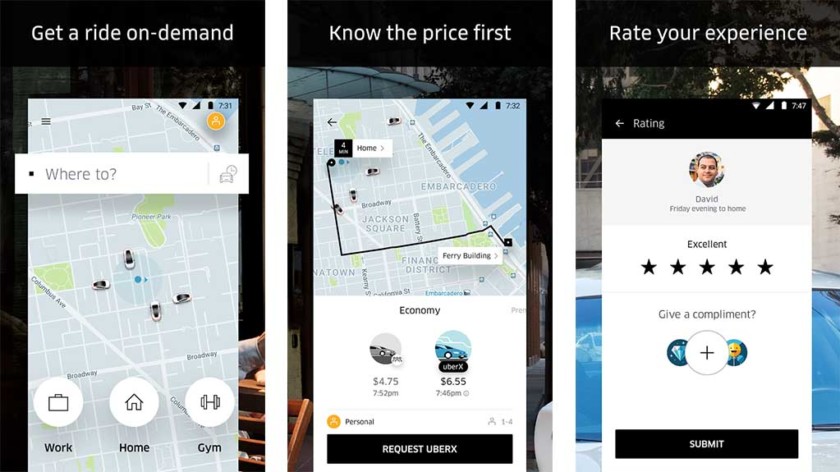 To build an app like Uber, you’ll need to have:

The registration form includes your first name, last name, phone number and preferred language. After you sign up, the company confirms your phone number through an SMS. You can then confirm your preferred payment method. It is a cashless system that charges you after the trip is over.

Uber’s booking system allows the drivers to accept or deny ride requests. They can also see the customer’s current location and final destination.

3. The ability to Identify a Device’s location

Uber uses CoreLocation framework to obtain the geographic location in order to schedule location and delivery. That is a vital step as the geolocation is what the app is based on.

The Uber app then sends directions to both the driver and the user. To make the direction available Uber’s developers use MapKit for iOS and Google Maps Android API for Android. They also implemented technology from other mapping companies to solve any other logistical problems.

When the user books a ride, they get instantly 3 notifications from the Uber app:

The user also gets the full information on the driver’s status, the vehicle’s license number, and an ETA on the taxi’s time of arrival.

The Uber app uses a cashless payment system, which pays the drivers automatically after every ride and the company gets 25% of the driver’s fare. That is made possible because the user’s credit card is connected to the app. Uber partnered up with Braintree, a world leader in the mobile payment industry. However, there are as well other good options such as Stripe, or Paypal, via Card.io.

What Technology is behind the Uber App?

The application is based largely on JavaScript and Objective-C. The same is also used to calculate supply and predict demand. For the real time dispatch systems the application uses NodeJS and Redis. Text messages are available due to the cloud communication platform, Twilio. Regarding push notifications, they are based on Apple Push Notifications Service for iOS and Google Cloud Messaging (GCM) for the Android App.

Uber’s biggest presumed competitor was founded in 2012 and went public roughly 2 months before Uber. That company name is Lyft, which is an on-demand transportation company. Same as Uber, Lyft also put their hand on self-driving cars. Together with Aptiv, they are using BMW cars and turn them into self-driving vehicles, which are now tested in Las Vegas. Up to date it seems like Lyft is driving faster on that road than Uber.

On the other side, there is an application out there that allows the users to compare the expected ride costs of their journey for both Uber and Lyft. Anyride is available for iOS and Android and it connects to your ridesharing accounts. The application takes the fares driectly from Lyft and Uber’s servers. This allows it to show the full range of services, including costs for shared and private rides. Anyride is also able to apply any discounts that the two companies might have at that moment, so that the customer is not paying more.

What is Uber’s next destination?

The company has currently passed some milestones as going public and puting their hands on self-driving cars. But what is ahead of it? According to Uber’s current CEO Dara Khosrowshahi the next step for the company is to become a multi-modal company. This meaning that they want to connect to bikes, buses, car rentals, and  even flying taxis.

The company has already acquired the bike-sharing startup Jump as a step to achieve its multi-modal goal. But what is even more fascinating is that Uber’s Elevate team is already working on a shared air transportation project, called UberAir. The project is planed for 2023 and it is expected to provides rides between suburbs and cities, and ultimately within cities.

The achieve the goal, Uber will continue working with city and country stakeholders in order to provide a safe, quiet and environmentally friendly aerial ridesharing network. Uber wants to launch their small, electric VTOL (vertical takeoff and landing) aircraft first in Dallas and Los Angeles. You can see how the project is supposed to look like in the company’s video below:

However, the biggest danger for Uber is the company itself. Uber’s CEO Dara Khosrowshahi has the toughest task to rebuild the people’s trust in the company and correct the previous mistakes. Otherwise its market shares will continue to shrink, and Uber will go from ride-sharing giant to just another insignificant player.