Years ago it seemed like a thing of the future. Now there is no doubt that we are experiencing mind-boggling advances in the field of Artificial Intelligence. AI is a hot trend that doesn’t seem to be cooling off anytime soon. In fact, many people think that it is the holy grail of computer science that will transform the world we are living in. The possibilities that come with this revolutionary movement are endless! And yes, this movement has already started.

For some people, AI could mean the end of humanity. The world-renowned physicist Stephen Hawking and real life Iron Man Elon Musk say that AI will bring disruption to our world, perhaps even “summon the demon”. However, they are quick to mention the potential benefits of creating what is often referred to as “The Singularity” too.

One such benefit is AI saving human lives. There is an example that comes from a company that Elon Musk helped to build. Watch how a self-driving Tesla car saved Frank van Hoesel’s life by slowing down before the accident happened right in front of him:

AI doesn’t cease to surprise us. Even the experts believe that this is going to change everything.

So what should we expect from AI next?

AI has landed and while you are reading this, AI continues to transmogrify industries and humanity. Let’s check out some of the bewildering AI predictions to watch out for:

Granted, writing and content creation covers multiple industries, but it is predicted that by 2018, 20% of business content will be authored by machines. By using emerging tools with automated composition engines, information can be turned into natural language writing. This already exists in journalism, PR and marketing. Now, robots can be found sweeping Wall Street. Quill is an AI drafting reports by turning data into written text, helping financial giants make sense of a tsunami of data. Wiredelta® is joining the party of conversational interfaces, developing a chatbot for WordPress that can build websites and apps.

In the legal industry, Ross, the world’s first artificially intelligent attorney built on IBM’s Watson, has been hired by law firms including Baker & Hostetler, Dentons, Womble Carlyle and many others. Ross makes case preparation for divorces, fraud or bankruptcy easier. Basically, Ross narrows down thousands of answers to the most relevant ones and presents them in natural language. Ross also monitors the law around the clock and notifies lawyers of new court decisions that can affect their cases. Even the CIO of the law firm Baker & Hostetler believes that Ross can help to enhance services they deliver to their clients.

Representatives of the media and publishing industry are also embracing the benefits of AI! Tribune Publishing, which is now called  “Tronc”, will start producing 2000 videos a day using AI. The publishing company is fully aware that the media industry is shifting rapidly and realized the need for an innovative approach. For this, they have launched troncX, a content curation and monetization engine. TroncX combines their existing assets with new AI technology to accelerate their digital production. This engine will help them materialize their goal of producing 2,000 videos a day. Check out a fun example below, a trailer to the movie Morgan. The movie is about AI, and the trailer is created by IBM’s Watson, an AI 🙂

AI is changing online publishing too! Meet Larry, an AI driven social media assistant. It was developed by Echobox to help you curate your presence and grow your audience on Facebook and Twitter. Larry takes all the repetitive work like analyzing historical and real-time data. This gives online publishers more time to write content.

It has been predicted by 2020, customers will be able to manage 85% of their transactions without human interaction. An example from the retail industry using AI can be spotted in several San Francisco Bay Area stores.

LoweBot is a bilingual customer service robot. It shows users where to find specific items in-store by rolling around and taking them there itself. LoweBot wanders through the aisles by using a series of cameras and lasers to navigate the shop. It also scans inventory and captures real-time data, helping the company to detect customer behavior and purchasing patterns. With the help of LoweBot, the human employees have more time to focus on delivering project expertise and personalized service to the customers.

Today, self-driving cars are no longer a futuristic idea. Because of the rapid advances in AI, it became possible sooner than we thought. Major automakers such as Ford, Volvo, BMW, and Tesla have already released or are about to release fully autonomous cars. It’s predicted that by 2020, there will be 10 million self-driving cars on roads! 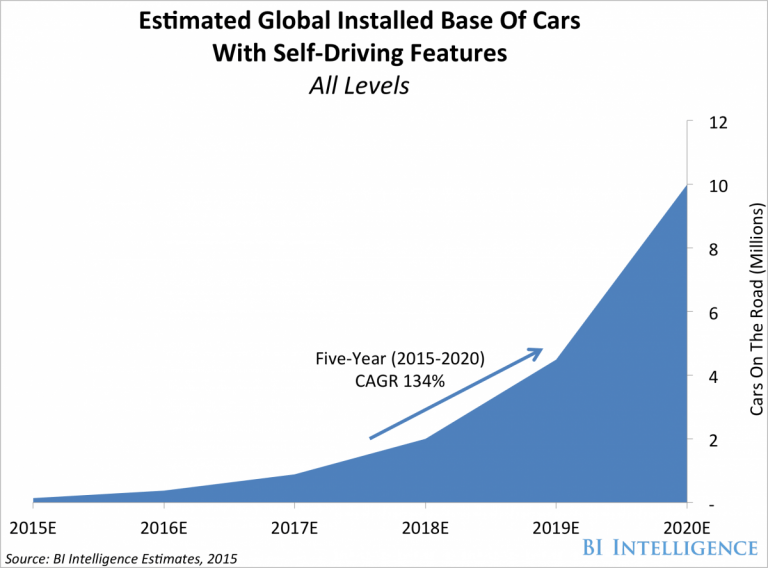 Just to add on how amazing these self-driving cars are, Tesla’s Assisted Driving mode saved a man’s life by steering him to the hospital. When Joshua Neally was in a life-threatening emergency, assisted driving mode was enabled on his Tesla Model X, which he bought just a few weeks before. The car helped him to get to the hospital. If that sounds unreal, check out Tesla’s latest Level 4 Autonomy video:

And last year, self-driving buses were rolled out on the streets of Helsinki. Finland has become a popular testing hub for self-driving technology. The Easymile EZ-10 automated buses can carry up to 12 people and were used in successful trials on closed Dutch roads. These automated buses are seen as a possible extension of Finland’s public transport system. This is going to move commuters into higher-volume transport systems rather than replacing all human-driven buses.

As AI continues to advance, the question that keeps coming up is unemployment. Fear not, this technology will open up new career opportunities that we cannot even phantom today. How? First, let’s take a quick look back at the history.

The development of the steam engine paved the way to an unprecedented degree of automation. This also gave rise to the Industrial Revolution and drastically changed the way people worked at that time. Due to this shift in technology, some traditional jobs were no longer needed, but new ones were created at an even faster pace. These jobs were typically within areas that had previously only been accessible to the rich. But due to large demand, labor markets had to adapt fast. A good example of this was back in the 19th century. At that time, education was only accessible to a very small fraction of the population. With an increased demand for skilled labor, many direct jobs like teachers and indirect jobs in construction, engineering, and management exploded.

During the 20th century, we’ve seen the rise of computers, robotics, electronics, and automation systems. All these have contributed to massive automation of industrial processes with a little AI presence. Although automation is in play, human intervention was still required. This created jobs within software engineering and positions required for the development of the automation. This has also paved the way for inventing new products (think about robotics), creating jobs that didn’t exist before.

So, the answer to the question is NO. On the contrary, AI has the potential to transform unemployment into an individual choice rather than being forced.

Because of the intelligent machines powered by AI, our minds are freed from toilsome work. Perhaps, this will elevate our society and we will revel in a new Golden Age. It is a period where tasks that seem complex today are accomplished automatically and easily! As a result of AI, prices and overall costs are expected to plummet. In software is crushing the cost with AI, you can read how AI is driving down the cost of living to an absolute minimum. This could potentially limit the need to “work for money”, solving the problem of unemployment in itself.

With all these predictions, one might ask: will AI become a Skynet-like superintelligence? is AI a threat to humanity? Perhaps not, but one thing is for sure: AI is an unstoppable revolution poised to affect and transform our lives in so many ways.

Wiredelta® is aiming to do so in web and mobile development, so come and join the future with us today!

PrevPreviousThe Ultimate Guide: Wix, Weebly and Squarespace vs. WordPress, Joomla and Drupal
NextCMS or MVC Framework, Which One to Choose for Your Website?Next