Everybody’s favorite genius, billionaire, playboy, philanthropist Elon Musk has been raising concerns about the rapid rise of Artificial Intelligence for a while now. Musk thinks that superintelligent AI is one of the biggest existential threats to humanity. However, by his own admission that warning fell on deaf ears – “I was trying to really sound the alarm on the AI front for quite a while, but it was clearly having no impact (laughs)” the rest of this quote is how Elon’s new, hot company Neuralink came to be – “Oh fine, okay, then we’ll have to try to help develop it (Artificial Intelligence) in a way that’s good.”

Neuralink’s ultimate goal is for humans to eventually be able to merge with AI. In the short-term however, Musk’s team will settle for treating brain disorders like Alzheimer’s, spinal injuries and blindness. The company is privately owned and funded by Musk along with his partners in Neuralink. It currently has $158M in funding and employs 90 people, yet the company is actively looking to hire more specialists in fields like robotics, histology, neuroscience, biochemistry, software security and more.

Neuralink Launch Event took place on the 16th of July 2019 in San Francisco. During the presentation, the company unveiled its first product – N1. It is a kind of brain-machine interface or BMI for short. In order to understand what that means we have to take a quick detour.

BMIs are a way for one’s brain to communicate with an external device, or another brain. They are usually used for research and repair of a person’s cognitive or sensory-motor functions. A good example is a cochlear implant. It’s been used since 1957 to aid people with impaired hearing to restore some sense of sound. Other examples include deep brain stimulation for Parkinson’s disease and responsive neurostimulation for Epilepsy.

Fundamentally, there are two things BMIs are concerned with. They need to get the right information from the brain and they need to send the right information to a device. The former is usually done by capturing the brains output. In other words, what a person’s neurons are communicating. The latter is typically achieved by stimulating the aforementioned neurons. Thereby, altering a brain’s natural flow.

While there were strides made in the BMI industry, it is fair to call it emerging, young and full of untapped potential. This is where Neuralink comes in, particularly their first product, N1.

Neuralink’s first product focuses on helping quadriplegic people. There are three components: a brain implant, a wireless device with Bluetooth that attaches to one’s ear and a smartphone app.

One of the most notable N1 features is the number of electrodes it has. The already mentioned BMI that helps with treating Parkinson’s disease has 10 inelastic electrodes. This inflexibility leads to increased risks of injury. Whereas N1 has a hundred times more – 1000 mini electrodes – and are just one-third the diameter of a human hair. 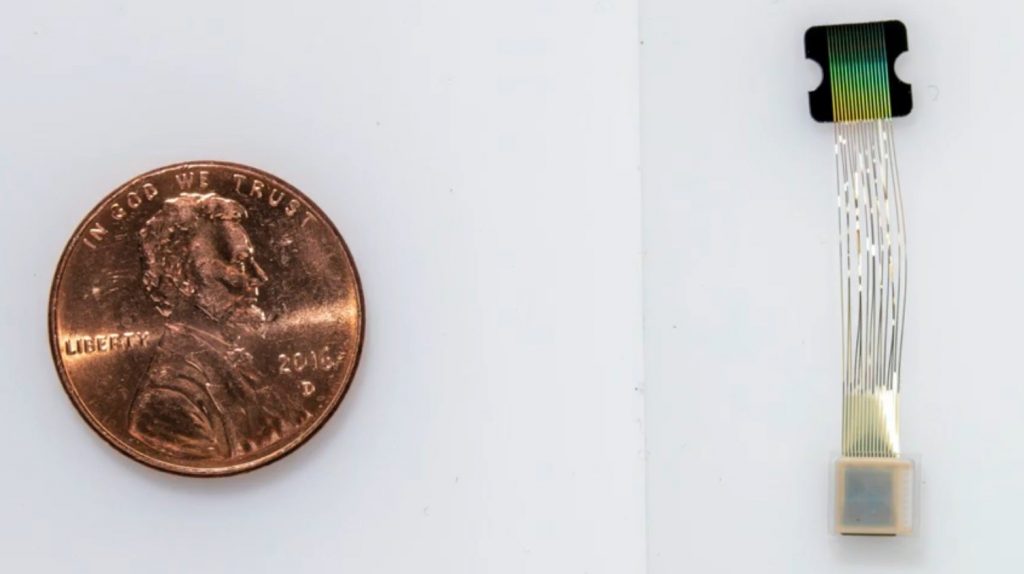 In order to insert these tiny threads safely into one’s brain, Neuralink created a robot surgeon. It’s lightning-fast, inserting 6 threads per minute. With the possibility of human error all but removed, this machine would ensure that none of the blood vessels are ruptured.

Furthermore, to record signals from all those electrodes, Neuralink’s team designed a custom 20 square millimeter chip. It requires a low amount of power to work. The chip is highly configurable and clocks in at 1024 stimulation/record. Currently, N1 is being tested on rats, and Neuralink waits for approval from the United States’ Food and Drug Administration (FDA) to begin human trials. The company is hopeful that it might happen as early as 2020.

While Neuralink slowly but surely moves towards the future of BMIs used by humans, artificial intelligence is on track to create further advancements in intelligence.

The Current State of AI

There are three big reports that came out in 2019 that extensively cover the current state of AI – The State of AI 2019: Divergence; State of AI Report 2019 by Nathan Benaich and Ian Hogarth; A Turbulent Year: The 2019 Data & AI Landscape by Matt Turck. All of them outline in one shape or form breakthroughs made in recent years within AI. Here are some of the implications from those breakthroughs for the years to come:

Natural Language Processing or NLP for short is an AI discipline where people teach machines to understand human’s natural language. This AI branch is trending right now. It’s been used in work with virtual assistants like Google Assistant, Alexa, Siri, and Cortana. It is also widely used in spellcheckers like Grammarly and Google Docs.

In order to understand how much progress has been made in the NLP area, we need to turn to a new benchmark test aptly called GLUE. The human base level according to this test is 87 points. Just in one-year’s time, the best performing state-of-the-art NLP algorithms jumped from 69 points to 89 points, surpassing the human baseline. The progress is so fast that a new benchmark SuperGLUE has been recently introduced.

Speech synthesis as the phrase suggests is human speech creation through technology. A computer is used to convert normal language text into speech in what is called a Text-to-Speech system. Until very recently it would be a distinct robotic voice, but not any more.

Everything changed in May of 2019 when small Canadian startup Dessa presented their hyper-realistic AI voice simulation. As a handy prop, they chose one of the most known podcasters Joe Rogan. Joe had nearly 1300 podcasts at the time of the recording. That gave Dessa’s system enough training data to create a complete replica of Joe’s voice. The replica was then asked to talk about chimp hockey teams. It was done with the help of deep learning text-to-speech system Dessa called RealTalk.

The implications of this breakthrough are frankly terrifying. Even the creators themselves admit that a faked voice could be used for harassing people, impersonating their loved ones, smearing political candidates and so on.

Reinforcement Learning (RL) is a subset of machine learning. It’s about taking the right action to maximize the pay-off in specific situations. Its goal is to find the best possible behavior in particular situations. The AI is forced to learn from its own experience.

Here everything started with chess in long-forgotten 1996, where AI eventually learned how reliably beat grandmasters. Then AI shifted attention to Chinese board game Go, which has more possible outcomes than there are atoms in the universe. Two decades have passed. In 2016 Google held Google DeepMind Challenge Match. Where 18 times Go champion Lee Sedol lost to the AI named AlphaGo 4:1. At which point Elon Musk started to raise his voice about his concerns with AI:

“I mean, you’ve got these two things where AlphaGo crushes these human players head-on-head, beats Lee Sedol 4 out of 5 games and now it will beat a human every game all the time, while playing the 50 best players, and beating them always, all the time. You know, that’s like one year later.

Speaking of real-time strategy games. At present, in 2019, DeepMind doesn’t show any signs of slowing down. It beats world-class player 5-0 in Starcraft 2. A game that has even more degrees of freedom than the game Go.

DeepMind’s relative OpenAI comes back with a vengeance after losing in 2018. This time around the AI wins two back-to-back games against World Champions. Over four days 15,019 players challenged OpenAI in 7,257 competitive games. The bot team had a win rate of 99.4%. Scary opponent indeed.

It seems that AI is a double-edged sword, it could be our salvation and our doom. One thing is certain, there’s no way of stopping it at this point. All reports point to Artificial intelligence evolving at a faster rate than we initially anticipated. We can only hope that humanity doesn’t collectively win the Darwin Award, but instead manage to merge to make good use of this powerful technology.

PrevPrevious10 Most Popular AngularJS Websites of 2019
NextIs Single Page Application (SPA) Development Worth it in 2019?Next