All good things have an end, and with this last article, so does our WordPress miniseries. So far, we’ve learned about how WordPress got where it is today. Then, we looked at it’s most popular plugins as well as WordPress’s most beloved themes. Now, we now know so much more than that over 37.5% of the world’s websites are powered by WordPress and its derogatives. But most importantly, we learned how versatile and empowering WordPress is.

Yet, this is all theory without practical examples, and we thought that today we complete the lesson and reveal how WordPress is used around the world. So, here are the top industries where WordPress excels and how it helps make a greater digital impact.

Corporates and large enterprises need fast, easily maintainable, and responsive websites. They also need scalable, user-friendly, and SEO ready tools and WordPress is a master in all of these areas. But probably the most important feature of WordPress that fits the bill for corporate sites is the amazing multisite feature. 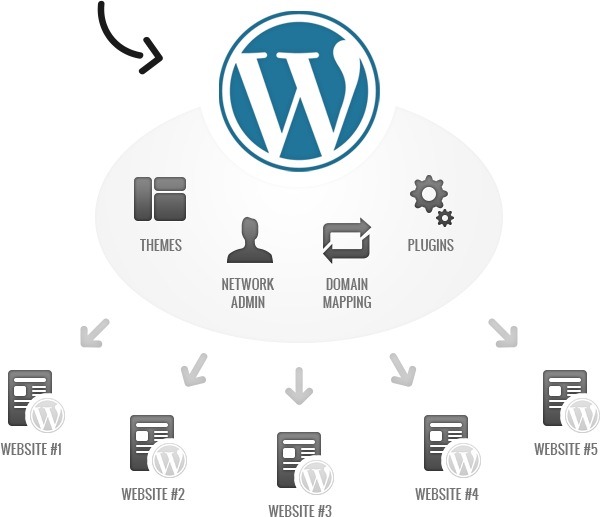 The multisite allows users to easily re-create a copy of their website within a network managed from one single dashboard. These all-powerful users are called super admins and they have full control over the entire network and the plugins installed. But the multisite also allows them to create regular admins and other limited-access users. So, in a multinational setup, each country and department have access only to their slice of pie. Nevertheless, they have almost full customization power over their local subsite, while still maintaining the corporate image and not worry about the plugins or other updates. And, since the super admin is the only one who has access to these derogatives, one-click updates the entire network, with no sweat, no development costs, and no headaches.

Today, WordPress powers the corporate sites of companies like Walt Disney and Sony Music Entertainment, the international record company. Groupe Renault, the French automotive giant also chose WordPress as the tech behind their landing page. And as a more personal example, we recently launched a new and improved corporate website for our partners at EGN. The new platform was built from scratch in WordPress, using the multisite to expand and maintain its evergrowing network.

However, WordPress doesn’t only power company sites. The technology caught the interest of governmental entities, such as the White House and the UK’s National Archives. And, a more local example, The Official Site of Sweeden.

2. WordPress in Media and News

Online magazines and news outlets need a CMS with strong SEO features behind it, that is also easily maintained, with fast updates, and beautiful themes. So it’s not really a surprise that WordPress, the world’s best CMS, is a part of the tech used by many popular such sites. A few of our favorite tech-oriented examples are Wired, TechCrunch, and The Next Web. But WordPress also made its way into other areas of interest, like business and fashion. As a result, we see it present behind international companies like Fortune, Quartz, and Vogue.com.

However, WordPress also provides a digital version for established traditional newspaper companies. Such examples are The New Yorker, and the famous British magazine, The Sun. Not to mention the Canadian official news site, o.canada.com. That’s right, Canada has an official news site, and it’s powered by WordPress. Oh, Canada!

3. WordPress in Education and Culture

Nothing in this world is more important than education. Imagine how our world would look without education. We would probably still paint on cave walls with our fingers and chase wild animals with wooden sticks. Education helps economic growth, cultural development, and the overall evolution of our civilization as we know it. Bur before we get an education, we first need access to it, and WordPress is just the tool for the task.

In this area, we have one prominent entity with great influence in our education and cultural evolution, the Smithsonian, the world’s largest museum and research institution. WordPress is proudly part of this institution’s tech stack, by powering both the Smithsonian National Museum of African Art and the Cooper Hewitt Smithsonian Design Museum.

But WordPress is also behind sites like CollageChoice.net, a US-based platform that helps students find their perfect choice of higher education. Notable US universities, such as Washington University and Georgia State University use WordPress for their sites too.

WooCommerce is the most popular e-commerce plugin out there, it’s no wonder WordPress has a strong presence in the online shopping industry. Not only that, but the multitude of translation plugins and the multisite makes it easy for businesses to expand.

Our two first examples might sound familiar, but they are some of the highest-ranking WordPress powered e-commerce sites. We are talking about aThemes and GeneratePress, the two themes mentioned in our previous article. Note that the ranking takes into consideration the site’s performance grades and site authority, not the popularity of the brand. Examples of popular commercial e-commerce sites are S’Well Van Heusen and Protest.

So far we presented simple websites with simple content. But how does WordPress fare with more challenging tasks, like streaming videos online? Well, as you might expect, quite well. WordPress is usually a light and fast platform, therefore it takes only a small part of the bandwidth to load content, pages, and static media. So using the extra bandwidth for streaming is not an issue. But also, WordPress is scalable, so adding new episodes and managing each show on a streaming site is easy.

A popular example of streaming services that use WordPress to power their platform is AMC. AMC is the American network behind shows like “Better Call Saul” and “The Walking Dead”. For those of us with a nostalgic memory of MP3s, WordPress is also responsible for keeping alive MP3.com. This is a popular site with retro music from the ’80s, ’90s, and ‘00s ready for streaming or download.

Back to business. Service agencies like ourselves love WordPress. And not only because it allows us to build a landing page, a portfolio, a blog, a contact page, all while translated into however many languages we want, still at a decent price. But because we can help our clients do those things and save some money in the process.

Aside from our own wiredelta.com, agencies like Kinsta, Human Made, and Modern Tribe also use WordPress to promote WordPress. Each agency provides its own line of services related to WordPress tech. For example, Kinsta is a premium managed WordPress hosting agency. Human Mande brings WordPress to big enterprises and publishers. Finally, Modern Tribe, much like ourselves, build websites with WordPress, empowering companies to scale fast and affordably.

Usually, non-profit organizations don’t have the luxurious budget of a for-profit organization, they raise fundings from other entities. And because of this, they also go through great scrutiny when spending each dime of that budget. As you might imagine, having an expensive landing page promoting their cause and mission is a no-go. Especially as the more share of the budget that goes towards the actual cause, the better. So how to get a landing page at a low price or even free? WordPress, of course!

The open-source technology, along with its army of free plugins and free themes makes it affordable and convenient for any non-profit organization. An inspiring example is Invisible Children, a charity group fighting against the horrific rebel group The Lord’s Army

In their tireless work, Invisible Children are putting a stop to the terrorist group, who abducts and force-trains child soldiers for their twisted causes. A similar but closer to home example is our friends at Game Academy. Game is an international NGO working towards providing at-risk children with group activities. They promote cultural and social development in a safe environment for children of all races, religions, or cultural background.

Well, WordPress did start out as a blogging tool, so it comes as a given that it’s a popular solution for this need. However, there are so many other tools big companies like Slack, Mozilla, and even Microsoft could have used for their blogging activities. Yet they chose WordPress.

But wait a minute. Microsoft, the tech giant? Why would they use WordPress? Simple, because the people behind blogs and news sections for corporations are also marketing people. Employees hired for their creativity and promoting skills, and who are usually non-technical. So, a simple platform with an almost flat learning curve like WordPress is the obvious choice. Even SAP, the huge service-as-a-product software company, and Facebook use WordPress as a blogging tool.

More than a blog, WordPress originally was the platform for your very own personal site. And it still is. In the same way WordPress helps big corporations, it is also helping individuals, famous or not. Examples of celebrities using WordPress for their personal sites include New York Times #1 bestseller: the 4-hours workweek man Tim Ferriss.

An easy choice for Tim since he is one of the best-known promoters of the “work smart, not hard” ideologies. Other house-hold names like The Rolling Stones, Beyonce, and Usain Bold are also included in this list.

Last but not least, WordPress is a well-known community-building technology, especially because of its open-source nature. WordPress powers many such communities trough plugins like BuddyPress and bbPress. Both plugins are simple and fun, and, more importantly, scalable. And, probably the best example out there of a WordPress powered forum is the actual WordPress Support Forum.

This incredible forum uses bbPress and includes general WordPress questions, installing, and fixing WordPress. But it also includes more in-depth discussions like how to create a network of sites using WordPress and how to build your site with accessibility in mind.

Moving away from the techy forums, WordPress also helps other fun communities connect and discuss. Just a few examples, WordPress also powers the forum behind the very popular game, Angry Birds, WeddingBee, a huge forum for wedding-related discussions, and Gap year, a place where students find information, advice, and inspiration for their gap year.

We hope that you enjoyed this miniseries about one of our favorite web tools. But more importantly, we hope we opened your minds and hearts towards the amazing technology that is WordPress. We said this over and over again, and we are saying it again now. Through our articles, we barely scratched the surface of WordPress’s power and influence.

We are absolutely convinced that soon enough WordPress will power more than half of the websites in the world. And with the incredible community, it has behind it, WordPress will only become better and better over time.

Is there anything you would want to learn about WordPress that we’ve missed in our articles? Let us know, and we will research and presented it for you.