We have recently brought you web development trends to watch out for in 2019. Now, we want to follow it up with trends you as a developer might consider skipping this year. Knowing what you can not do sometimes is more important than knowing what you can do. Jumping on certain bandwagons and hype trains could backfire. Eventually, costing you a pretty penny. These are the things you should be aware of to avoid this situation.

jQuery is another JavaScript related trend. jQuery is a JS library that was created to simplify DOM (Document Object Model) manipulation, AJAX, CSS animation and event handling among other things. This tool kit gets on this list, because of a growing trend among new developers to use it as a sort of crutch for adding behavior to apps via a maze of if-statements that makes up the jQuery’s great API. Seduced by the library’s simplicity they forget that it is not a programming language and nothing complex can’t be written without in-depth JavaScript knowledge. 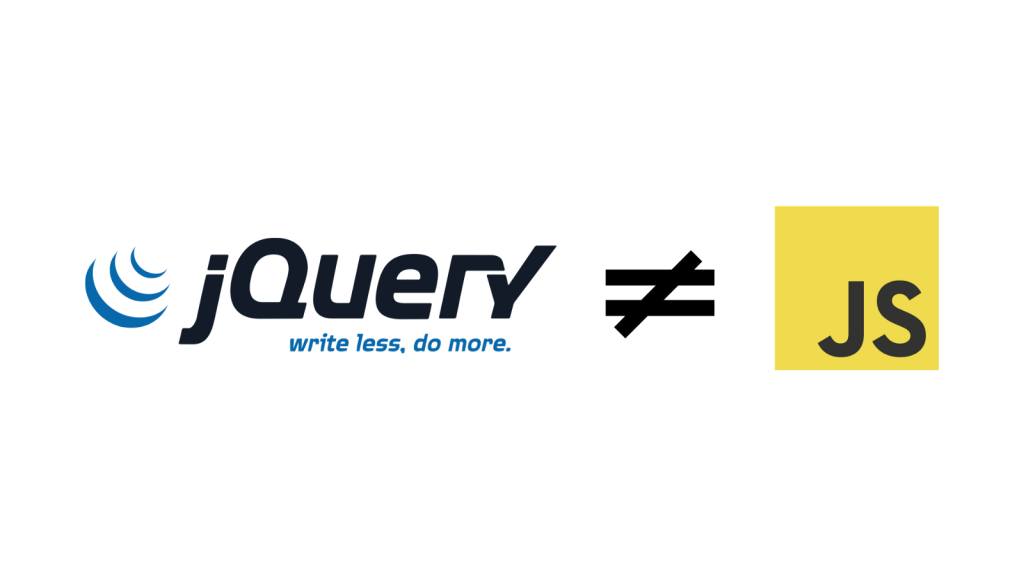 In practice, it leads to developers getting used to jQuery’s comforts and wondering why they have to learn JavaScript in the first place? First, it leads to a classic – “if the only tool you have is a hammer you treat everything as if it was a nail” situation. In other words, every project becomes a jQuery project whether it makes sense to load a massive library or not. And then inevitably a JavaScript-related project comes along. Panic. Several Reddit/Stackoverflow posts later new developer realizes that he/she is constrained by the lack of core JavaScript knowledge. But it’s too late, the project is halted.

To avoid this situation, make sure you are well versed in core JS concepts. Thankfully there is a wealth of JavaScript related educational materials out there on Codeacademy or Udemy.

Ignoring mobile-first and sticking to desktop-only

There are so many good reasons why people build web apps that are “mobile-first”. Meaning, these web apps are designed, developed and tested first and foremost from mobile devices. Not desktops.

60% of Google searches are done via mobile devices. Only 5 years ago, the figure was nearly half that—34%. 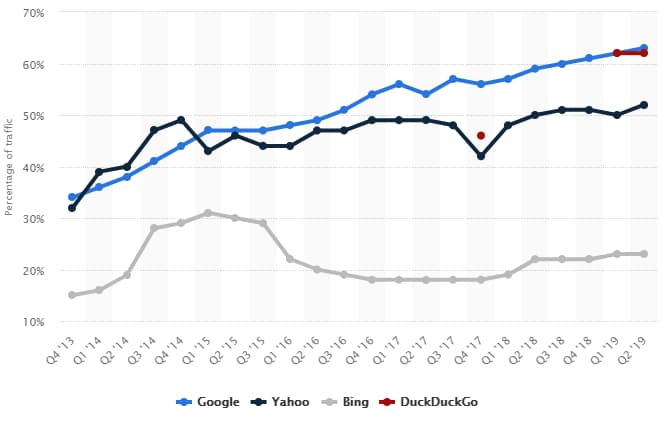 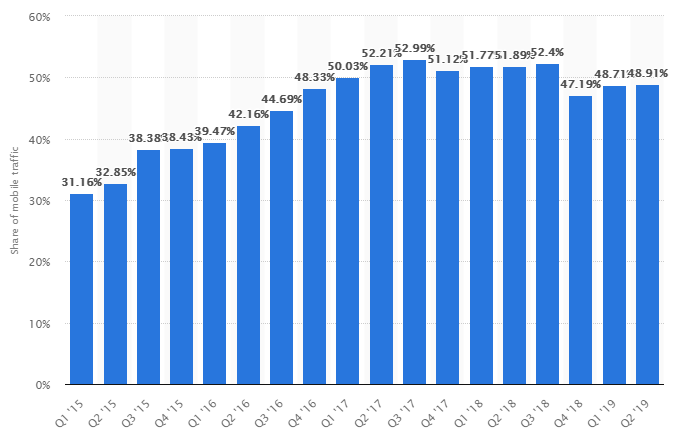 Don’t be one of the dinosaurs that sticks to good old desktop-first, you need to get off this bandwagon if you want your web app(s) to be relevant in 2019.

Therefore if you haven’t looked into it yet, you need to familiarise yourself with responsive web design as soon as possible. It is a development and design approach that takes into account the user’s screen size, platform, and orientation.

It typically consists of various grids and layouts, as well as images and CSS media queries. When implemented correctly your application is going to be able to automatically respond to your visitors’ preferences. Whether it is a switch between their numerous devices, which would require your app to accommodate for resolution changes, image size, and scripting abilities. Or their security measures like VPN, the responsive web design approach should ensure that users consistently see the same result whenever they visit your application or website.

As the graph suggests TypeScript is hot right now. It’s an open-source programming language developed by Microsoft. TypeScript is a superset of a JavaScript, meaning that existing JavaScript programs are also valid TypeScript programs. What the language has going for it is a static typing option. This means that you don’t have to define variables before using them. This is where you have to be careful. 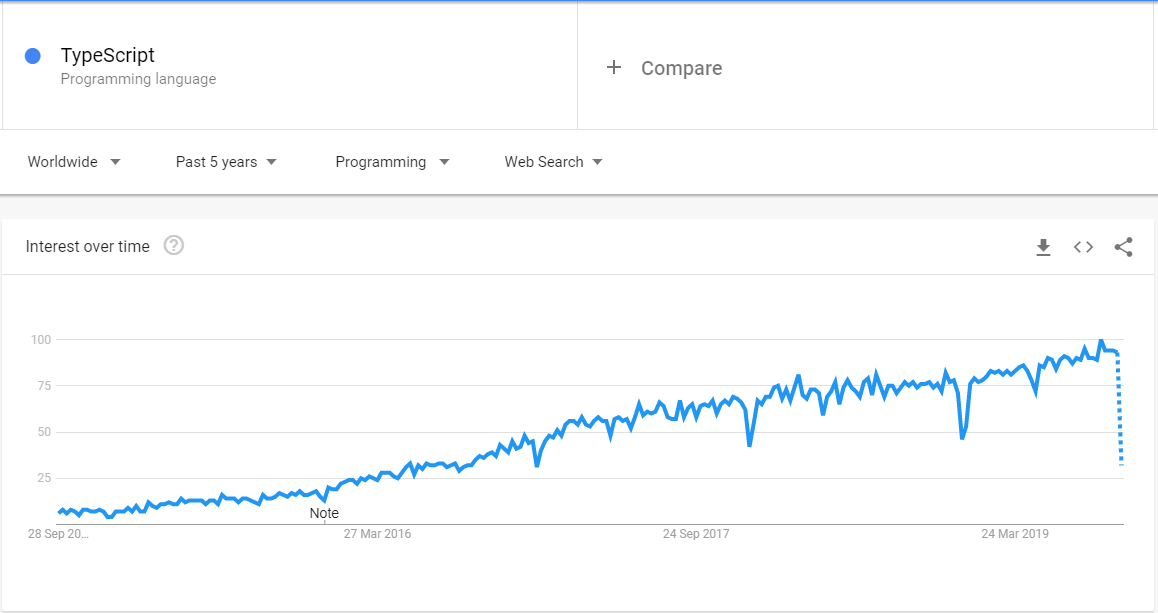 There are folks out there under the impression that using static typed languages like TypeScript leads to fewer bugs. They think so because static type languages in simple terms work as though somebody sits next to you when you code and shouts every time you make a typo. While they are partially right in that one is able to catch a subclass of bugs that way. Overall, however, the empirical data suggests that using static type languages doesn’t decrease bug density in any significant way. The study conducted by Daniel Lebrero went over GitHub data. This is what he had concluded after analyzing the data. 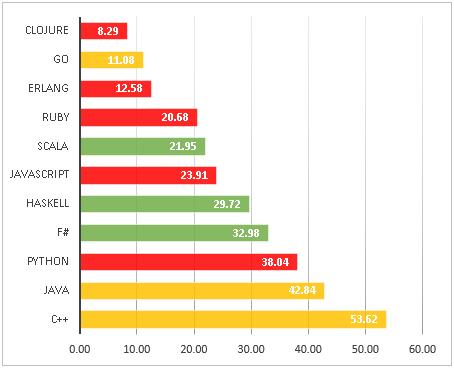 “Whilst not conclusive, the lack of evidence in the charts that more advanced type languages are going to save us from writing bugs is very disturbing.”

Therefore, if you are ready to jump on TypeScript bandwagon you ought to do it for the right reasons like for instance TypeScript code is easier to understand and implement, as well as refract. Not to mention that the language actually makes you trust your developers more because it is easier to merge.

Minimum Viable Product or MVP is an extremely popular concept among web developers these days. As the name suggests, we are talking about a product with an acceptable bare minimum of features. This is where you have to be careful. People seem to think that MVP’s main purpose is to get your product on the market faster than the competition by sacrificing a few of the features. That is a misconception. While it certainly helps to get there first, the main reason for creating an MVP is to get your product in front of your potential customers as quickly as possible. First and foremost to figure out if there is an actual market need for your product to begin with? It might seem obvious, yet 42% of start-ups fail because there is no market need for the product they developed. The feedback you get from users is invaluable, as it helps you to catch errors faster and course-correct accordingly. 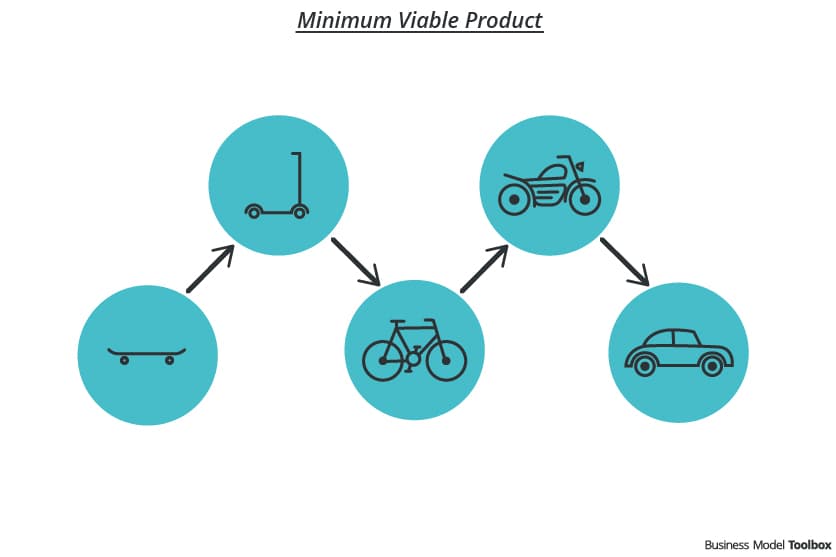 The popular consensus among developers that you have to develop your Minimum Viable Product with scaling in mind. So as to avoid rewriting substantial portions of your application later down the line. While it is true that at some point you might have to rewrite it, at the MVP stage you need to find out if your high-risk assumptions are true. Assumptions like already mentioned looming question – “Is there a market need for our application in the first place?” Scaling issue is a good issue to have, it means that there is a demand for your product. But cross that bridge when you come to it. Otherwise, you might spend a lot of time for naught.

MVP is a popular concept for a reason, it is quite powerful if applied correctly. Therefore make sure you are thinking more feedback and less being first.

Thinking yourself a web designer

This trend still persists even in 2019 and particularly seen among developers with basic skills in Photoshop or similar software. Many developers instead of sticking with what they are good at, start to lose precious time tinkering in Photoshop, perfecting their “design”. There is a reason a separate web design position exists. A skilled web designer has a trained eye and can perfect your design much quicker. What takes web designer minutes, could take developer hours to figure out things like alignments, font style/sizes, colors and so on.

Therefore it is our express recommendation if you find yourself in a situation like this where you instead of coding doing photoshop work ask an experienced web designer for help.

The internet is taking over more and more of our lives, but not every web development trend is worth pursuing in 2019. Sometimes it is better to wait and let the hype die down. If you think we missed any hype trains worth noting, don’t hesitate to tell us and don’t forget to subscribe to our newsletter to get the latest trends in tech. If you have an idea for the next big thing in 2019 and beyond you need to build, we would be delighted to hear from you.