It is of popular knowledge that nowadays every organization needs a website in order to have a solid presence on the internet. Websites serve the purpose of communicating a company’s mission, values and accomplishments, among many other things.

Sports teams are no different and they might be even more sensitive to these aspects than actual companies. They depend not only on their fans and followers but on sponsorships, volunteer work, and strategic partnerships and alliances.

Many sports teams recognize the imperative need for a comprehensive channel to communicate with their fans, followers, volunteers, sponsors, strategic partners and such. Information including training seasons schedules, volunteer vacancies, and news about the team’s participation in sporting events are among the very messages most teams need to effectively display.

Websites have also become a virtual space for communities within communities. Teams can video stream their performances so fans around the globe can follow up on their accomplishments. These live video streams allow fans direct access to events that may otherwise not be available for geographic reasons.

Youth Vikings is a high endurance and performance extreme sailing team from Denmark. The team comprises six of the biggest extreme sailing talents of the country between the ages of 19 and 24 years old.

The Red Bull Youth America’s Cup is a sporting event, that gives young sailors around the world a chance to prove themselves in the cutting-edge hydro foiling boat AC45F. The event is believed to create a direct pathway into the pinnacle event of sailing: America’s Cup. The Red Bull Youth America’s Cup was first held in San Francisco in 2013. Its second edition was held in Bermuda 2017, with the Youth Vikings’ participation as Denmark’s representative contender.

For this occasion, the Youth Vikings turned to Wiredelta® for a solution regarding their needs for an effective communications channel, as well as, a promotional and informative platform. This included team members’ profiles, performances, events, and accomplishments. 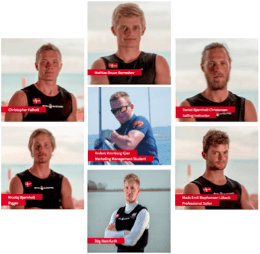 The resulting product of the teaming up between Wiredelta and the Youth Vikings was a pro-bono sponsorship project. A simple responsive promotional WordPress website with cross-browser compatibility with Chrome, Firefox, Safari, and IE9+.

The website was launched on January 2017 and displays several sections structured as Landing Page Video (a promotional background video obtained from the Team’s Youtube channel), Youth America’s Cup, Media coverage, Our Team (including the advisory board), Contact Us and a Footer. For this project, Wiredelta proudly boasted PHP for the back-end development and MySQL for the database connection management.

The “Our Partners” section of the website is perhaps, for a sports team, the most important. This is where they present and thank their sponsors for supporting their mission, sharing their vision and giving that extra nudge to accomplish the proposed goals.

Technology made it possible for us to enter the age of information and knowledge disrupting our lives in the best way possible. The Youth Vikings theme is disruption because it is relevant for sailing, business, learning, and society overall.

Due to the fact of disruptive technologies, sailing has evolved more than any other sport. Hydro foiling enables boats to lift out of the water surface and “fly.” This greatly reduces drag, since the only thing left in the water are a few carbon fibre thin blades.

Wiredelta couldn’t let this opportunity pass by and decided to embark on “hydro foiling” Youth Viking’s communications and promotional platform. Do you feel like teaming up with Wiredelta? Check our