From ancient Greek mythologies to sci-fi fantasies, Artificial Intelligence has become nowadays reality and tomorrow’s future, all blended into one. The real humans who brought it to life are the mathematics professor John McCarthy and his colleagues – Marvin Minsky, Claude Shannon, and Nathaniel Rochester. Everything started at a workshop held on the campus of Dartmouth College during the summer of 1956, when the term Artificial Intelligence (AI) was used for the first time.

What is the difference between Machine Learning (ML) and AI?

At Dartmouth Artificial Intelligence Conference, mentioned above, the artificial intelligence technology was explained like this:

“Every aspect of learning or any other feature of intelligence can in principle be so precisely described that a machine can be made to simulate it.”

There is a misunderstanding that AI is a system. In fact, AI is actually the technology that is incorporated in the system. More precisely, it is intelligence that people want to add to the capabilities of a machine, so that it acts like a human being. However, AI has developed enormously since 1956, and is now an umbrella term for various disciplines like:

To help you visualize it better, you can see all the areas that AI covers on the graph below: 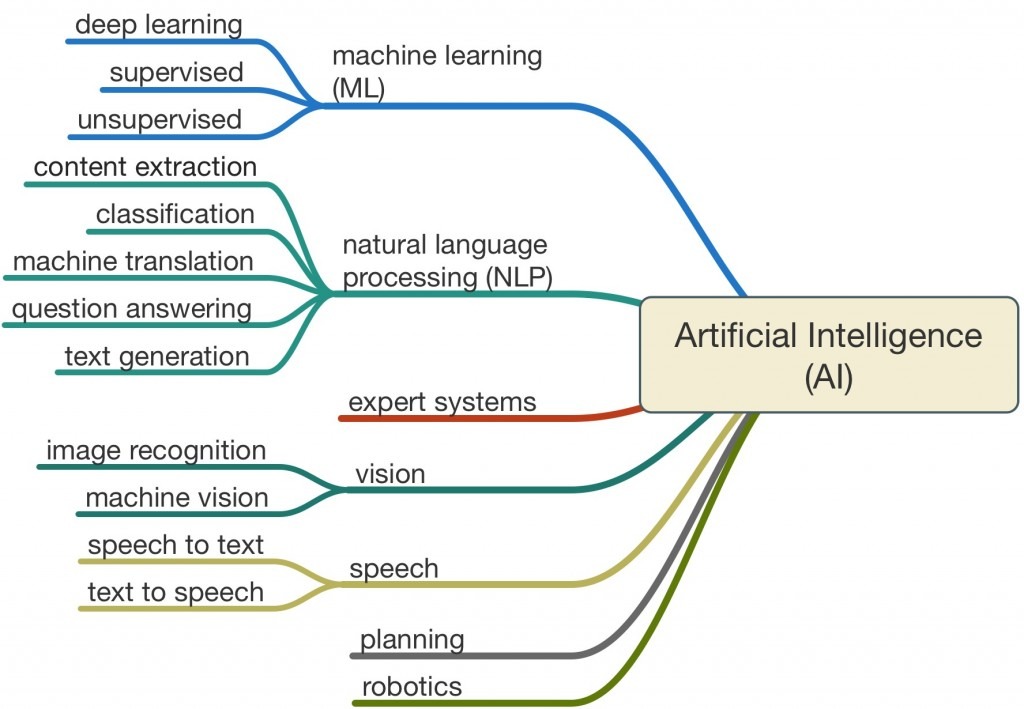 Because of the very vague definition of what intelligence actually is, AI can refer to a lot of different things, such as a computer program playing a game of chess or a voice-recognition system. Therefore, the level of AI is generally split into three categories: Artificial Narrow Intelligence (ANI), Artificial General Intelligence (AGI), and Artificial Super Intelligence (ASI). Don’t worry, we will explain each one of them further down.

On the other hand, machine learning (ML) is just a part of the broader AI term. The main principle of ML is that a machine is able to analyze data and learn from this data by itself. This means that, instead of a developer coding a software program to execute a specific action, the ML system can recognize data patterns and make predictions based on them. So far this part of AI has been the most applicable to various business requirements, and has grown so popular that many falsely perceive ML to be a replacement of AI. This is, as shown above, certainly not the case.

Narrow AI is the only form of Artificial Intelligence that people have managed to build. What distinguishes Narrow AI from the others is that the technology is able to perform only a single task. For instance, making weather forecasts, playing chess or make sales predictions. A real life example of Narrow AI is IBM’s Deep Blue, which won a chess game against the grand master Garry Kasparov in 1996. Furthermore, speech, voice and image recognition also use Narrow AI. When humans combine several Narrow AI technologies, they can enhance already existing creations like cars and make them self-driving.

The downside of Narrow AI is that it can perform only a single task. That’s why, it is also known as Weak AI. Basically, Weak AI can’t translate text files and order food for you at the same time. You will need a more complicated AI technology for that to be able to do a diverse set of tasks. But this doesn’t mean that Narrow AI is useless. Exactly the opposite! It is very good at repetitive narrow tasks, recognizing patterns and relationships from huge data sets. However, this is still not even close to human-like behaviour. And this is what General AI is all about.

As we mentioned above, the main task of General AI is to obtain human-like behaviour. That’s why it is also referred to as Strong AI. It should be able to understand its surroundings and act rationally like a person. Unfortunately, humanity still hasn’t been able to reach this level of artificial intelligence, but we are getting closer.

It turns out that it is a very difficult task to achieve AGI. That is because the way human intelligence has evolved is a very complicated process, which is hard to replicate into artificial, computer intelligence. For example, in order to make a decision, people are weighing the results from similar situations in the past against what would happen in the future in regards to their decision. This is very difficult to teach a computer to do. Furthermore, it is very hard to teach a machine to invent something that doesn’t exist, similar to how humans invented trains, ships and VR, for example.

ASI is when AI surpasses human intelligence. According to Oxford’s University Professor and AI expert Nick Bostrom, ASI is:

“an intellect that is much smarter than the best human brains in practically every field, including scientific creativity, general wisdom and social skills.”

However, ASI is even further from human reach than AGI. Despite that, there are still a lot of people that fear of it or at least don’t think it will bring any good to the humanity, like Elon Musk. You can see for yourself in the video below:

That’s also why, Musk approaches AI from a different perspective. He wants—with the help of his team from Neuralink—to create a device that will allow us to merge with AI. The way he goes about it is creating a device that can be implanted in human brains and then read the brain’s neurons, so that people can control computers with their thoughts. In other words, turning humans into cyborgs, instead of turning robots into humans. We really can’t tell which approach sounds scarier!

What supervised machine learning does is that the model is loaded with input data, and a supervised model should then be able to execute the desired output actions by analyzing the relationships between the data. In most cases, however, the desired action isn’t completely accurate. That’s were the learning takes place. In other words, the model receives more data (or validation data) to test its accuracy and implement the necessary adjustments. The model is then completed when it reaches the required precision.

So far supervised learning is the most used method for machine learning. It comprises, mainly but not only, of regression and classification models for analyzing the data.

In the classification model, the output variable is a category. In other words it should be able to classify data in different categories like “red” and “blue”.

The other most used model in supervised learning is the regression model. Here the output variable has a continuous value like “salary”. The model should be able to find relationships between the data and make predictions based on them.

The second most famous type of machine learning is the unsupervised learning. Opposite to the supervised learning, it doesn’t require training data and output values. What it does is examine natural occurring patterns in the data sets.

Within the unsupervised machine learning there are several methods. One such method is clustering. Here, the data is put together in groups based on similar features (see the picture below). This method has been used a lot in recommendation systems, medical imaging and market research.

Detection of anomalies is another method of unsupervised learning. Here, the data that doesn’t follow the same trend is configured. This method finds its application in fraud detection and unusual behaviour.

Another type of machine learning is reinforcement learning. Reinforcement is usually used in psychology for stimulating specific behaviour in individuals by applying award-penalty systems. This meaning that the person receives an award when they behave the way we want, and they are punished when they don’t. It is similar when applied to machines. The machine is trained by being awarded when achieving good results and vice versa. In this way incentivising to improve further.

Reinforcement learning is mostly applied in robotics and gaming. One example from the gaming field is AlphaGo. The computer program learned how to professionally play the ancient strategic Chinese game, Go. How was this achieved? The developers first entered the rules of the game and basic strategic movements. In three days, it achieved a high level of knowledge and started playing against itself. In 2017, the successor of the computer program won against Ke Jie, the world champion at the time. Because of that, the program was awarded with a professional 9-dan by the Chinese Weiqi Association.

Should we fear AI in the future?

Surely, massive advancements in AI has been made over the past decades. But the super-intelligent AI still seems very far from our reach. On the bright side, it is expected that AI will help us in all kinds of ways like curing diseases, helping elderly people with everyday life actions, and maybe even helping us find a solution to all the environmental problems. But what if we actually reach that Super AI level and the machines turn against the humanity as it is shown in so many sci-fi movies? Should we fear or embrace artificial intelligence? In any case, in order to get there, we will need more machine learning engineers to push the barriers to modern day AI, and a good first step is to read about our articles on Artificial Intelligence.